The Olecko commune is located in the north-eastern part of Poland, in the Warmian-Masurian Voivodeship. The following roads intersect in the commune: national road Gołdap-Olecko-Ełk (no. 657) with voivodeship roads Olecko-Raczki (no. 654), Olecko-Suwałki (no. 653), Olecko-Giżycko (no. 655). The average distance between the larger cities of the region (Augustów, Ełk, Gołdap, Suwałki) is 30 km, which makes Olecko an excellent base for exploring the region.

The Olecko commune is situated on the route connecting the Land of the Great Masurian Lakes with the Suwałki-Augustów Lakeland. Glaciation had the greatest impact on the relief, as a result of which it is characterized by a very varied relief. The area is hilly – the hills range from 121 m above sea level in the southern part of the commune to 220 m above sea level in the north-eastern part.

The city enchants visitors with its charming location on the Lega River, which flows picturesquely from the lake, wrapped around the city like a blue ribbon. The air in this area is one of the cleanest in Poland. This was due to, inter alia, remoteness of the region from big city centers and close proximity to four forests: Augustowska, Romincka, Borecka and Piska. The attractive location of the Olecko sports base in the vicinity of the park and the lake translates into excellent conditions for active recreation and practicing various sports.

Olecko plays the role of the administrative center of the commune and the Olecki poviat. It is a multifunctional center of supra-local importance. Olecko is a commercial and service center, educational, cultural and entertainment as well as administrative and financial center. All offices are located here. The leading functions in the city are administration and services, mainly trade and construction, as well as recreation, tourism and leisure. The functions accompanying the basic functions are the residential function and the service functions in the field of service development, communication and technical infrastructure. The dominant function in the city is the wood and food industry (meat and dairy plants, bakeries).

It was here that the lowest temperatures were recorded among all localities located up to 1000 m above sea level. The extreme temperatures were assumed for Oleck – 34 ° C in summer and -36.4 ° C in winter; thus, the maximum temperature amplitude here is 70.4 ° C, although even more severe frosts were found locally, such as in March 1940 (-38 ° C) or during the real “winter of the century” in February 9, 1929 – 42 ° C. These circumstances were probably taken into account when installing a meteorological station here in 1893.

The offer of active recreation in Olecko is unique.
Tourists have at their disposal a sports and recreation complex located in a historic park, directly adjacent to the shores of Lake Oleckie Wielkie, less than 500 meters from the city center. The team consists of:

In the guarded, municipal swimming pool there are, among others pier with a jumping tower, water equipment rental, WOPR base, bar with a roofed shelter, volleyball court, sanitary facilities. During the summer months, many sports and cultural events take place here.

The vicinity of Olecko is one of the few corners of the country that combine the extraordinary beauty of the landscape with the freshness of the areas not damaged by man. The colors of forests green and blue of lakes dominate here – perfect places to rest.

The advantages of the Olecko Region include a wonderful microclimate, large water and forest areas, an abundance of game and birds, a variety of flora – perfect conditions for sailing, hunting, fishing and mushroom picking.

Nature reserves with rare tree stands and animals increase the tourist and sightseeing attractiveness of this region. Here you can meet species characteristic of the subpolar climate, appearing in the form of relics, plant communities preserved in an unchanged, original form – bog forest, raised bog and transitional peat bog. The last two communities survived as a result of the presence of lakes and local drainless depressions.

This diversity of terrain and the location on the edge of the Atlantic and continental climates maintains the diversity and richness of the flora. Therefore, there are many species and plant communities considered rare or in danger of extinction.

Olecko is a perfect place to spend free time with your family. It is worth coming here with a child, regardless of the season. In summer, spending time by the lake will be fun. The “Skocznia” bathing beach at Lake Oleckie Wielki is particularly child-friendly. You can also spend time outdoors in the city parks. Children’s harcoms are favored by the park in the city center with a modern playground, while the recreational area located at the walking pathway to the city beach “Skocznia”, apart from the playground, also offers a skate park, tracks for cycling or roller skating and a rope pyramid. Entertainment is also provided by film screenings in the Mazur cinema. Close contact with nature will certainly be a considerable attraction for the youngest. Certainly, our youngest children will enjoy a walk along the Squirrel Path – the route along the shoreline of the city’s lake. It is a great opportunity to learn about new, previously unknown species of plants and animals.

The article is based on materials published on the website of the city of Olecko.

During the winter holidays, it is worth visiting the Kashubian region and getting to know the local culture and unique tourist attractions. Kashubia is a land of lakes, rivers, green forests, but in addition to... END_OF_DOCUMENT_TOKEN_TO_BE_REPLACED

Lake Lucienskie is the second largest lake in the Gostyniński Lake District. The lake is surrounded by a pine forest. The northern shore is occupied by the Leśny Lucien nature reserve. The eastern part is... END_OF_DOCUMENT_TOKEN_TO_BE_REPLACED

Lake Świętajno Narckie and Lake Brajnickie are so close to each other that they cannot be described separately. In the village of Warchały, which lies between them, the distance between the lakes is about 200... END_OF_DOCUMENT_TOKEN_TO_BE_REPLACED

A short history of Janowiec When the last glaciation subsided, covering 11,000 years ago, almost the entire continent of Europe, through the area where Janowiec is now, a great old Vistula flowed, whose wide riverbed... END_OF_DOCUMENT_TOKEN_TO_BE_REPLACED

Ryn – castle on the lake

Ryn – history The oldest information about Ryn, or rather the Teutonic castle that gave rise to the settlement and the later city of Ryn, comes from the chronicle of Wigand of Marburg from 1377, Read more… 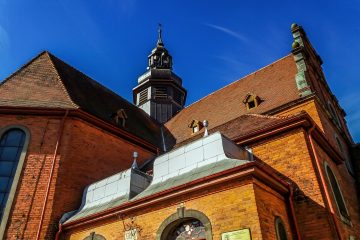 For winter holidays in Pomerania – Kashubia

During the winter holidays, it is worth visiting the Kashubian region and getting to know the local culture and unique tourist attractions. Kashubia is a land of lakes, rivers, green forests, but in addition to Read more… 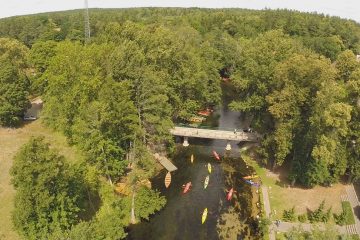 The Piecki Commune is located in the south-eastern part of the Warmian-Masurian Voivodeship and is adjacent to the communes of: Mrągowo, Mikołajki, Ruciane Nida, Świętajno, Dźwierzuty and Sorkwity. The area of ​​the picturesquely situated commune Read more…