The Łomża Landscape Park of the Narew Valley was established in 1994. It covers an area of ​​7,368.22 ha in the following communes: Łomża, Piątnica, Wizna in the Łomża district of the Podlaskie Voivodeship. The area of ​​the buffer zone is 12,228.58 ha. It is located at the junction of two lands: Mazowiecko-Podlaska and Mazursko-Podlaska. The Narew River flowing through the Park separates Wysoczyzna Kolneńska from Wysoczyzna Wysokomazowiecka.

The Łomża Landscape Park of the Narew Valley in Drozdowo is located in the Podlaskie Voivodeship, approx. 70 km west of Białystok, and its western border meets the city of Łomża.

The park was established by the regulation of the Łomża Voivode in December 1994. The idea behind its creation was to preserve, almost intact, the valley of the Narew River with valuable communities of water, rush, peat and meadow vegetation and small fragments of riparian forests, as well as to protect the unique, exceptionally interestingly shaped relief of this area, created as a result of the Narew river breaking through the plateau Kolneńska and Wysokomazowiecka. At this point, the Narew, on a several-kilometer section of its course, creates a gorge through moraine elevations with an edge zone, the undulating slopes of which rise to a height of about 40-50 m. This section is also called the Narew Gorge Valley.

The central part, constituting the axis of the Park, is a 16-kilometer section of the river, located between the mouth of the Łojewek river (101m above sea level) and the bridge connecting the city of Łomża with the town of Piątnica (99m above sea level).

Downstream from the village of Pniewo (left bank) and Rakowo Boginie (right bank), for about 10 km there is a “real” gorge. “Unearthed” in the moraine hills, the flat valley is 3 to 1.5 km wide. When we stand on one of the hills, we will see a unique view of the meandering, meandering, unregulated below the Narew River and numerous, long lakes-oxbow lakes created after the changes in the course of the river. The changes of the river bed made it difficult for the inhabitants of some villages to access their meadows and pastures. After changing gear, these areas suddenly found themselves on the other side of the Narew. That is why there were many ferries in this area (Rakowo, Krzewo, Bronowo). The villages, visible from above, have elongated buildings situated along the Narew River and occupy the lower part of the edge of the valley.

During periods of normal spring, the river disappears, and the flowing water from the spring thaw creates a huge pool-lake, limited by the width of the valley. Only here and there, trees and taller shrubs protruding from the water, allow to locate the Narew riverbed. An additional attraction this time of year is the “noise” and the view of huge numbers of wild birds resting here, returning to their nesting sites.

Diversified relief, varying degree of soil moisture, result in rich flora and many species of animals. The current knowledge about the flora and fauna of the Park, based on inventory and monitoring works, allows to classify this area as one of the most valuable natural areas not only in the region but also in the country.

The air temperature in winter ranges from -5 to -3º C, and in summer about 17º C. Winters are longer (over 110 days) and summers are shorter (up to 90 days); the growing season lasts on average two weeks shorter than in central Poland. The snow cover in the Narew Valley lasts for about 80 days. The north-eastern part of Poland receives 500 – 600 mm of precipitation during the year. In the Park, the rainfall of the summer period prevails, which accounts for over 65% of the annual total. The climatic conditions of the Park are also influenced by the vast complex of peat bogs in the Biebrza Valley located in the east.

The warmest part of the park is the south-western part. The first autumn frosts most often occur in the north-eastern part on October 5. The last spring frosts are still observed in early May. The frost-free period is therefore about 150 to 160 days.

The influx of air masses is of particular importance in the warm season of the year, when the thermal diversity of the substrate is the greatest. Average values ​​of relative humidity range from 74% in summer to 90% in winter. The highest cloud cover in the vicinity of the park is observed from November to February (70-80%). Fog is most often formed in lower and more humid areas. There are over 50 days a year in the river valley.

In the area of ​​the Łomża Landscape Park of the Narew Valley, there is an interesting hydrological system, resulting from the geological structure of this area. The long and narrow valley of the unregulated Narew River, with the bottom of the valley with a slight slope (approx. 2 m along the length of 16 km), is flooded every year with spring freshets, which may persist even until May. The bottom of the valley is almost flat and the main surface formations are river sands and silt. There are peats in depressions and oxbow lakes. In the western part of the Park there are two rivers estuary: the right-bank Łojewek and the left-bank Gać.

The Łojewek river flows south of Bronów. It is characterized by a fast current almost along its entire length. Its middle section flows along a natural bed – a valley surrounded by steep slopes. This part of the valley is considerably boggy – there are extensive spring bogs here. In summer, when the water level in the watercourse is low, the banks rise up to 1 m above the water level. So there are great habitat conditions for beavers here. The final section of Łojewka is an artificially dug, straightened riverbed. Its estuary into the Narew River is at 102 meters above sea level. The Gać river runs approx. 3.5 km north of the village of Lutostań. In its lower course, below the village of Gać, it flows in a regulated riverbed. It flows into the Narew River at a height of 98.8 m above sea level.

The Narew Valley is additionally supplied with water from springs flowing from the slopes, which give rise here and there to small streams (Kalinowo, Kalinowo Reserve). There is a fairly large spring near the village of Niewodowo, which gives rise to the Narwica River. This river flows in the Narew valley, parallel to the Narew river, sometimes along a distinct bed, sometimes it overflows and disappears among the water vegetation, returns to the bed and dies again.

There are also numerous under-slope springs that seep just below the surface of the slopes, creating conditions conducive to the development of plants requiring high soil moisture (the slopes of Królowej Bona Hill). There are places where the waters, breaking out of the valley bottom, created characteristic surfaces with spring peats covered with alder and ash-alder stands (near the village of Pniewo).

HISTORY Zawieprzyce has a history dating back to the sixteenth century. Probably already at that time there was a defensive castle, founded on a magnificent hill at the fork of the Bystrzyca and Wieprz rivers.... END_OF_DOCUMENT_TOKEN_TO_BE_REPLACED

Sosnowica is the place where Ludwika Sosnowska stole the heart of Tadeusz Kościuszko. The history of Sosnowica A village on the Piwonia river and the Wieprz-Krzna channel, located in the Parczewski poviat. The seat of... END_OF_DOCUMENT_TOKEN_TO_BE_REPLACED

Wigry National Park is a beautiful place in the heart of which is the picturesque Lake Wigry. The area of ​​the reservoir is very attractive both in terms of tourism and recreation. The natural values... END_OF_DOCUMENT_TOKEN_TO_BE_REPLACED

Lake Wągiel is situated south of Mrągowo. The distance from Piecki to Mrągowo is 15 kilometers. Access is provided by the national road No. 59, which will connect with the S16 expressway in Mrągowo. It... END_OF_DOCUMENT_TOKEN_TO_BE_REPLACED

Kozłowiecki Landscape Park was established to protect the Kozłowieckie Forests – the largest forest complex in the vicinity of Lublin near Kozłówka – along with mid-forest meadows, marshes, ponds and agricultural and settlement enclaves. The Read more…

Sobibór Landscape Park was established to protect forests with peat bogs and mid-forest lakes located in the eastern part of the Łęczyńsko-Włodawskie Lakeland. The most valuable fragments are protected in the form of six nature Read more… 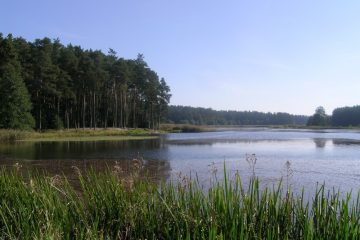